Ever since its advent in 1960, the UEFA Euro Football Championship has proved to be a pinnacle of perfection time and time again. It is one of the most prestigious international tournaments after the World Cup and on the same level as Copa America.

In 1960, only four teams took part in the first round of the tournament. France, Cyclo-Slovakia, Soviet Union, and Yugoslavia all comprised of four teams. After that, the tournament kept on expanding to more teams with time. 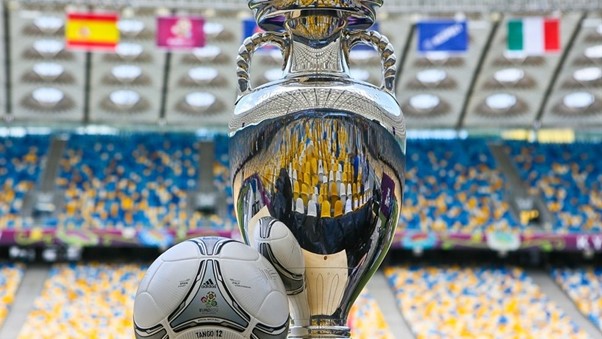 Up until 1976, the tournament saw four teams participating in the contest. However, in 1980, the format changed, and eight teams participated from 1980 till 1992. In 1996, the number of participants doubled, and it remained the same till 2012. From 2016 onwards to Euro cup 2020, the tournament will see 24 teams cruising to clinch the title.

Until UEFA Euro 2016, Germany and Spain emerged as the top contenders as the joint-most successful tournament teams. Both of the European teams have won three tournaments each. On a close second, we have France with two titles to their name and plenty of teams who are joint winners with one title each to their name.

Cristiano Ronaldo (9 goals) will be looking to beat Michel Platini’s record of similar goals in the UEFA Euro 2020. However, let’s look at other top goal scorers of the UEFA Football Championship in detail.

Fast forward to 2021, after a one-year postponement due to the novel coronavirus, we are ready to see further European football action.

Nothing but a drama was the UEFA Euro of this 2016 edition. Let’s take a short tour of which team won the European Championship and what is coming in the next iteration of International football.

Portugal eliminated France in a rather dramatic fashion in the finals of UEFA Euro 2016. Everyone will agree; many teams were better than the Portuguese on paper. But, what was the difference?

The Portuguese team played to the best of their abilities, showed team chemistry and maximum strength. After two shambolic performances against Austria and Iceland in the opening two matches, Cristiano Ronaldo rose to the occasion against Hungary. He showed what he and his team are capable of doing.

The team received a lot of negative criticism, and Ronaldo, single-handedly, took his team to the tournament’s finals. However, to his dismay, the Portuguese was stretchered off before half-time. 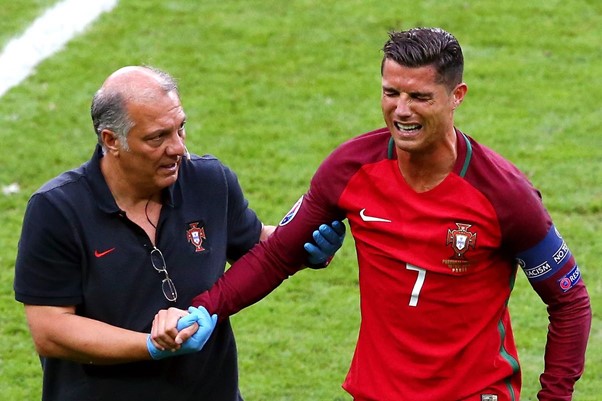 The team regrouped in the later stages of the match after the departure of an injured Ronaldo. Rui Patricio made some brilliant saves to keep Portugal in the game. As the game was nearing its end, the phenomenal efforts of the Portuguese side didn’t matter. Nevertheless, in the last few minutes of the game, Eder’s late replacement scored a long-range banger.

It was perhaps the first time any team finished third in the European Championship group stages and went on to win the tournament.

The domestic football is about to finish, and the World Cup qualifiers have started already, which means UEFA Euro 2021 is lingering around the corner. We’ll look at which team is a contender to win the next iteration of the European Championship.

The Belgians are red-hot favourites to clinch the title in the upcoming UEFA Euro Championship. If they do, it will be their first international trophy. You might ask, why Belgium? We have only one answer: Kevin de Bruyne.

The Belgian and Manchester City star is fully geared to go all guns blazing in the tournament barring any injury. He will be fully confident to kick things off after getting his team to win the Premier League under Pep Guardiola’s management. 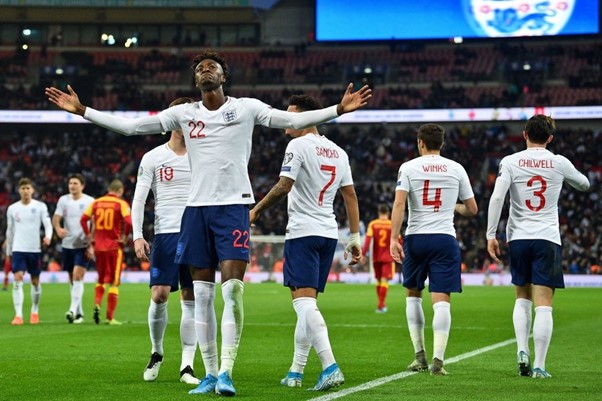 With immense squad depth, England is the only side that can bring out four different elite squads and might still have a little depth remaining. The quality they have at each position brings out a lot of competition, and they will not have any fears of injury lined up. The tensile strength and insane depth in their squad make them a contender to win the title this year.

With tons of experience and talent in attack, the Frenchmen will be looking to go all guns blazing. The defending World Cup champions have only one goal right now – to win another European silverware. But will they be able to do it? Well, let’s wait.

The UEFA Euro 2021 will feature six groups and 24 teams, each group containing four teams. The groups are as follow:

When it comes to international football, you cannot bet on the favourite teams to win all the time. The teams that play with fancy intricacies remain behind, and the underdogs get their hands on the trophy. So, which teams are the underdogs of the upcoming European Championship? Let’s find out.

As someone once said, ‘Italy is a dream that keeps returning for the rest of your life.’ The great Italians may have fallen after their last World Cup victory, but you can never write them down as long as they are in the tournament. 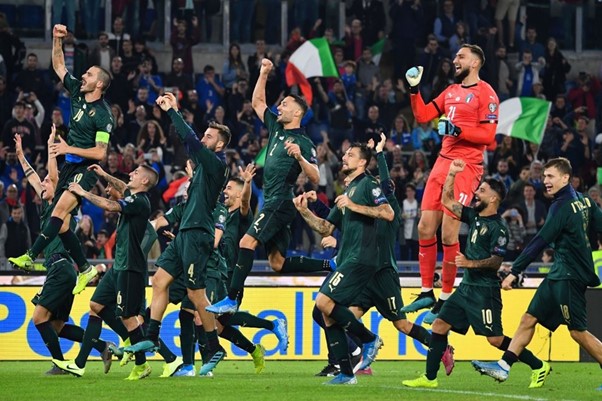 Their brute strength in defence is instilled in their games even after decades. Furthermore, their viable tactics to comprehend opponents’ defence through pace remain among the most fruitful combinations. How will Italy fare at the upcoming tournament? Let’s wait and find out.

While we may agree that the Netherlands is not the same side as they were a decade ago with Wesley Sneijder, Arjen Robben, and Robin van Persie at their side, they have now reinforced their team with rock-solid defenders and attack. 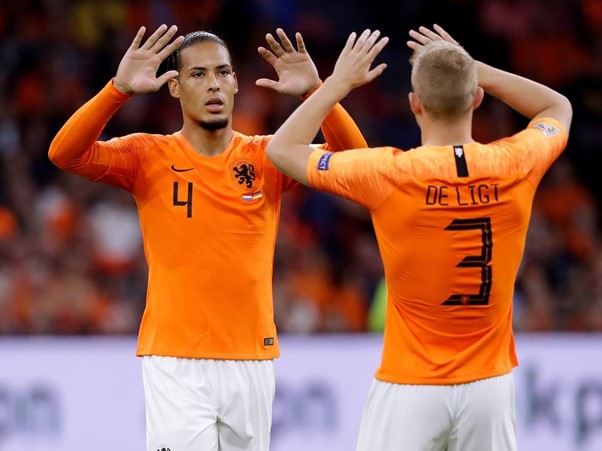 In defense, they have Virgil van Dijk and de Ligt. The centre-back pairing will be looking to stop most of the opposition attackers with no possible hitch. In midfield, they have tons of viable options, such as Frenkie de Dong, van de Beek, and even Wijnaldum. We all know they have the talent and experience at their disposal, but the real question, would they be able to combine it?

UEFA Euro 2021 will start on 11 June 2021, and it will last till 11 July 2021. With 30 days of nonstop football, the fans will be looking to feast their eyes and watch their favourite team battle it out for the championship. Let’s take a look at the schedule for the matches. 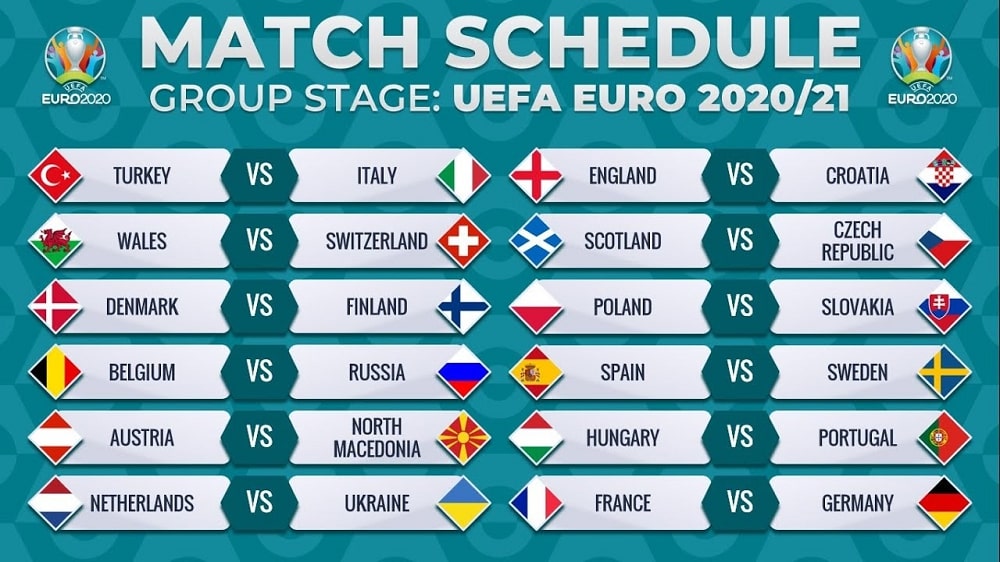 NOTE: The top two in each group together with the best four third-placed teams pass after the group phases are over. Furthermore, the rest days will be on 24 and 25 June.

NOTE: After the quarter-finals end, the rest days will be on 4 and 5 July.

The action is about to start, both on and off the field. What does this mean by specialist gambling tips and predictions? We will give you a detailed guide on Euro 2021 predictions, betting tips and the cash prizes on each opportunity.

You do not want to miss out on the full-time action. As the game unfolds, there will be many events occurring every minute, such as injuries, jaw-dropping moments, and an impeccable showcase of individual performances. The final score is always something that you can wager on.

· The First Team To Score

It should be an easy one! Bet on the team whose attacking threat seems much more likely to breakthrough. It is a sure-fire way to give you easy cash in hand if you bet on the right team to score first.

· Both Teams to Score

With teams like Holland and Italy stacked up in defence, this strategy will look more viable in one-sided matches (we won’t name them). Moreover, BTTS also counts after extra time, so if you put a bet on it, make sure you know the rules.

You hear the word penalty; you are abruptly going to think of Bruno Fernandes. But the question is, who is going to take them? Cristiano Ronaldo or him? In a penalty specialist, you have to decide whether or not the game will have a penalty. The money ball will be in your court if you win that one.

· To Score a Header

As the term suggests, we can expect plenty of goals in the upcoming UEFA Euro Championship 2021. Because we all know, some teams will be menacingly powerful on set-pieces. If you want to bet, Harry Maguire should be a safe bet.

A lot of drama here and there! Players are protesting and yelling at the referees, yellow cards, last man challenge for a red card, and many more. Don’t miss a fantastic chance to bet on the bookings in the upcoming iteration of the UEFA Euro Championship.

With around a month to go until the first match kicks off in the tournament, we have the Euro 2021 betting tips lined up for the potential winner, Top Goalscorer, and the respective team from each Group to top their groups.

The Euro 2021 odds are likely to fluctuate a few days before the tournament kicks off. Still, the following teams are the favourites to win the UEFA Euro 2021 tournament.

With so much competition of top strikers hovering in the tournament, there is one thing for sure: Ronaldo is eying up the top goal-scoring spot of all time. However, ahead of the game, the following players are considered favourites to be the tournament’s top goalscorer.

Lastly, we take a look at the potential winners of each Group for UEFA Euro 2021.

There is an array of Euro 2021 betting sites that will be made available two days before the first match. For hefty consideration, you can look at the following website for safe betting with secure payment methods.

BK8Asia is one of the most secure betting websites in Asia. The website offers a live betting feature that enables gamblers to follow-up on their bets. Serving more than thousands of international players every day, BK8Asia is easily the most trusted and biggest online casino in Malaysia. One of the reasons why people love our gambling platform is that we process a fully transparent funds transaction to all our players.

Any new players to BK8Asia are entitled to a hefty amount of Welcome Bonus. This allows the players to enjoy online betting at the max. Other than that, players may deposit funds into their gaming wallet via a few but reliable methods such as Quick Pay (Help2Pay), Bank Transfer, and Cryptocurrency (USDt & ETH).

A) The UEFA European Football Championship will be looking to celebrate its 61st anniversary in 2021 after a one-year postponement in 2020 due to COVID-19. For the first time in the history of the tournament, 12 cities will be hosting the tournament. The tournament will start on 11 June 2021, and the final will be played on 11 July 2021.

2. Q) Will the stadiums be open for fans?

A) According to UEFA executives, there is a big chance that the stadium gates will be opened to at least 50% of the audience. However, no such thing has been confirmed for now. It is a wait-and-see situation.

A) UEFA Euro 2021 is said to be the biggest competition ever because it wants to bring the battle to the fans. A total of 12 cities will be hosting the tournaments, i.e., Baku, Dublin, Glasgow, Copenhagen, Rome, London, Munich, Amsterdam, Bucharest, Bilbao, Saint Petersburg, and Budapest.

A) Many channels have taken the broadcasting rights, such as ABC, ESPN, and ESPN 2. By subscribing to a specific plan by the broadcaster, you will watch each match according to your liking.

A) Most of the initial matches will have a less expensive ticket, ranging from 50 Euros to 60 Euros. However, the cheapest seat for a final at Wembley will cost around a whopping 95 Euros.